The first man on the Moon, Neil Armstrong has died at the age of 82. He set foot on the Moon on the 20th July 1969, making his famous “one small step for a man, one giant leap for mankind” speech. 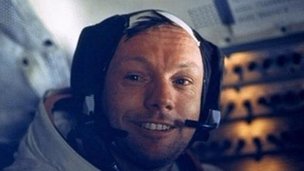 He died due to complications from heart surgery he had earlier this month.

“As we enter this next era of space exploration, we do so standing on the shoulders of Neil Armstrong. We mourn the passing of a friend, fellow astronaut and true American hero.”

Our thought are with his family.