Last night people across the UK saw bright objects in the night sky. The police in north-east were contacted by concerned members of the public reporting sightings of UFO’s lighting up the night sky. 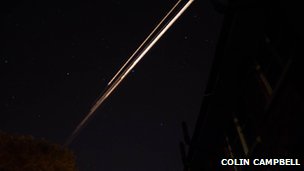 It is thought that the “light display” was due to space debris burning up in the atmosphere. The timing, the brightness and colour of the meteors suggest that they were not part of the expected natural meteor showers.