The Chancellor, George Osborne, has announced a £21.5m investment fund to boost the development of the new wonder material graphene.

The £21.5m investment fund would aim to take the technology from the lab to the factory floor.

Graphene
Graphene is a material made carbon atoms arranged in a regular hexagonal pattern, similar to graphite, but in a one-atom thick sheet. Graphene has many unusual electrical and mechanical properties that make it interesting from a fundamental science point or view, but also lend this wonder material to applications. Andre Geim and Konstantin Novoselov, both based at the University of Manchester won the 2010 Nobel Prize in Physics for demonstrating some of the properties of graphene. 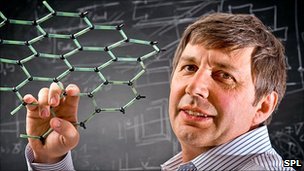 Funding
EPSRC identified the most promising graphene-related research projects in British universities that would benefit from state funding.

For example, Cambridge will receive more than £12m for research into graphene flexible electronics and opto-electronics. Other UK universities, including Manchester will also receive money.

We need to support our universities, they’re one of the jewels in the crown of the British economy

Physicists from Japan have grown crystals in near zero gravity by using a diving airplane [1]. The idea was to examine crystal growth under such conditions to uncover phenomena usually masked by gravity’s effects.

For more details follow the link below or the original paper cited.

This man had nothing to do with it…

Link
IOP News Physics on a plane: crystals made under zero gravity