Prof. Higgs, whom the Higgs boson is named after, is now a member of the Order of Champions of Honour. The honour has no title, but consists of the Sovereign, plus no more than 65 Companions of Honour. 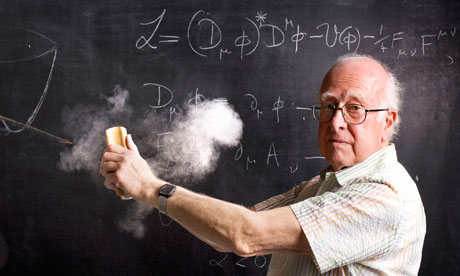 Other Companions of Honour include Prof. Stephen Hawking and Sir David Attenboroug.

The Higgs Boson
Prof. Higgs developed the idea of electroweak symmetry breaking to explain the masses of the Z and W bosons [1]. The Higgs-Kibble mechanism gives rise to the mass of all the massive elementary particles and predicted the existence of a new particle given the title “the Higgs boson”.

Computer simulation of particle traces from an LHC collision in which a Higgs Boson is produced. © CERN. Image credit: Lucas Taylor

Only recently at the LHC has there been evidence that the Higgs boson is realised in nature. CERN announced on 4 July 2012 that they had experimentally established the existence of a Higgs-like boson and that further study is needed to established if this really is a standard model Higgs boson, [2,3].

Is a Nobel prize in Physics the next big award for Prof. Higgs? We will have to wait and see.

Links
The Order of Champions of Honour